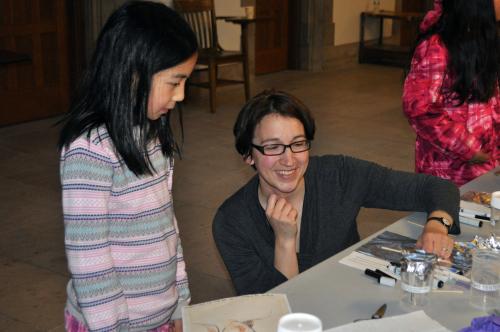 IPCH participated with hands-on experiments and a lecture on forensic analysis in the field of cultural heritage at Science on Saturdays on January 31, 2015. Science on Saturdays is an award-winning public lecture and activity series designed to raise interest in science and engineering and is hosted by Kurt Zilm and Yale’s Science Outreach. The event on the 31st involved a lecture by IPCH director Stefan Simon and engaging science demonstrations by members of the IPCH’s Technical Studies Lab, Drs. Aniko Bezur, Erin Mysak, and Jens Stenger.

Among the variety of science demonstrations preceding the lecture, the two hosted by IPCH were designed to provide children hands-on experience in forensic approaches to cultural heritage, the subject of Stefan Simon’s talk. One of the demonstrations introduced participants to the capabilities of infrared reflectography, an important examination and imaging method that may reveal drawings, text, or paint passages below the visible surface of paintings. First, graphite and charcoal pencils were used to write a secret message on a board which was then covered with blue acrylic paint. Then, a night vision web camera equipped with infrared LED lights was aimed at the board to see through the blue paint layer and display the message. This exercise created an opportunity to talk a common artist’s process, known as underdrawing, used frequently during the execution of a painting.

The second activity gave children a chance to use paper chromatography as a way to distinguish which of three black felt tip markers was used to create copies of Pablo Picasso’s drawing, Head of a Woman (Yale University Art Gallery, Gift of Katherine S. Dreier to the Collection Société Anonyme, accession number 1949.83). Participants got to collect samples from the copies, which had been printed on paper towels, by cutting out sections from them. They then soaked their section in a liquid that caused the ink to run and separate into its different components. Participants were asked to compare their separated ink to similarly separated examples of each of the three markers and decide which had been used to create the copy. This exercise created an opportunity to talk about the importance of materials analysis for detecting fakes and forgeries and the small size of samples removed from real works of art.

Following the science demonstration, Stefan Simon gave a lecture entitled CSI and the Angels of History: Forensic Analysis in the Field of Cultural Heritage. During it, he discussed real life examples of famous forgeries from his earlier research and the important role of close observation, interdisciplinary collaboration, and scientific analysis for their discovery. 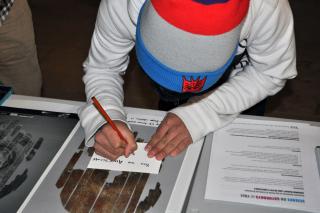 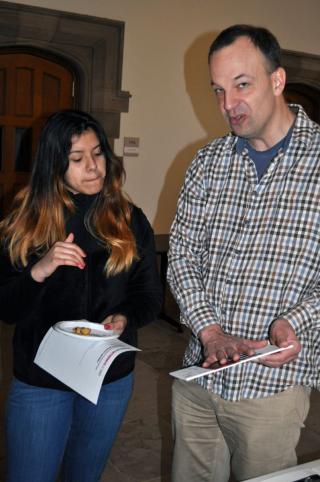 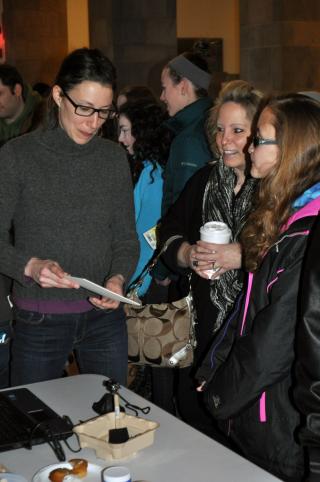 Erin Mysak shows participants (our own Laurie Batza and her daughter!) a board covered with blue paint before revealing the secret message with an infrared camera. 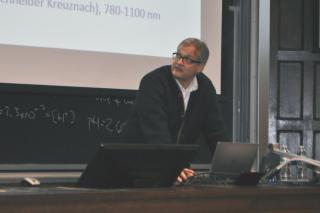