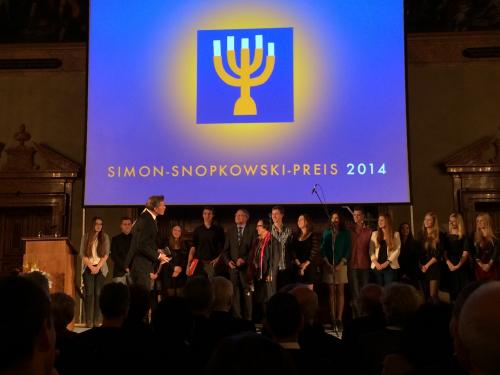 Documentation, restoration, and renovation of the abandoned Jewish cemetery in Bad Neustadt, Germany, a project carried out by high school-aged students from the Rhön-Gymnasium (Germany) and Mikve Israel (Israel), and initiated by Stefan Simon and Raanan Kislev, received second place in the prestigious 2014 Simon Snopkowski Award. The cemetery, which dates back to the 1800s, was used by the Jewish community of Neustadt a.d. Saale, Germany, until 1942, when it was abandoned. The goal of this project was to map out this small cemetery and document each grave, noting whether a man, woman, or child was buried underneath, and if possible, recording the cause of death.

Dr. Simon Snopkowski (born in Poland in 1925, died in 2001 in Germany), was a Jewish surgeon who, in his later years, became active in many Jewish organizations in Germany. The prize, named in his honor, gives awards to those who conduct research on Jewish history and culture in Bavaria and the Holocaust.

This collaborative Israeli-German documentation and conservation project on Jewish cemeteries on countryside of Bavaria is hoped to continue into 2015 with further consultation from Yale IPCH.