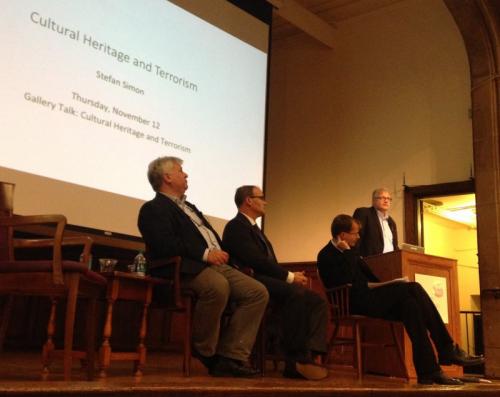 A panel discussion in the Whitney Humanities Center on November 12th focussed on the issues around cultural heritage and terrorism. Amr Al-Azm (Shawnee State University), Michael Danti (Boston University), and IPCH Director Stefan Simon discussed the ongoing crisis in the Middle East and Africa and its impact on cultural heritage . The discussion was moderated by Assyrology Professor Eckart Frahm .

The discussion provided insight into the dramatic events and recent war crimes, discussed in depth the destruction, looting and illicit traffic , which has reached an industrial scale on many sites in the Middle East.

The panel discussion was hosted by the Council on Middle Eastern Studies, Franke Program in Science and the Humanities, Yale Institute for the Preservation of Cultural Heritage, Near Eastern Languages and Civilizations, Yale University Art Gallery and the Whitney Humanities Center in conjunction with the exhibition “Painting in Time: Discovery, Analysis, and Interpretation of a Roman Shield from Dura-Europos”