Risks and challenges faced currently by the World Heritage Site of Palmyra, Syria 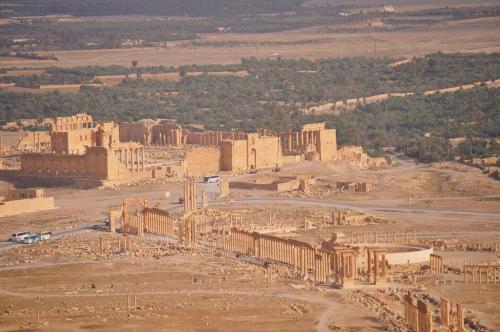 There are serious concerns about the fate of the UNESCO world heritage site of Palmyra, Syria. Voices on the ground in Syria have been uttering the fear, that a take-over by ISIS would inevitably lead to the destruction of all the monuments, tombs, families funerals, boost the ongoing looting of artifacts and may simply equal the end of Palmyra.

The situation seems to have slightly improved since last week, but there seems to be still fighting ongoing quite closely to the site. Artillery shelling or air strikes directed against ISIS troops also have the potential to significantly damage the world heritage site. The site already had been affected by earlier battles in 2012 and 2013.

Palmyra should be declared a demilitarized zone and protected by all means. It is a world heritage site on the base of its outstanding universal value in three categories, among others for “representing a masterpiece of human creative genius”!

The international community needs to move quickly and put pressure on their respective governments to find a common language bridging across all political differences between countries, and turn this language into concrete action. After the loss of Nimrud, Hatra, after the dramatic loss through ongoing looting and illicit traffic in many countries affected by the current crisis, it is now important to speak out against these horrific war crimes, ” on all channels” as the Director General of UNESCO, Irina Bokova has said.

In a statement, issued on May 15th , Prof. Dr. Maamoun Abdul Karim,  Director-General of Antiquities and Museums in Damascus, Syria, underlines : ” we are not going to lose this battle targeting our existence, history and civilization. In addition, we will spare no effort and will go to great lengths to protect and rescue our cultural heritage which constitutes an invaluable component of the human heritage.”

Our thoughts and prayers are with our colleagues on the ground in Syria, who are standing in the first line to not only defend their cultural heritage, but ours, the world’s heritage. And not only our past, but also our common future.

Director Yale Institute for the Preservation of Cultural Heritage