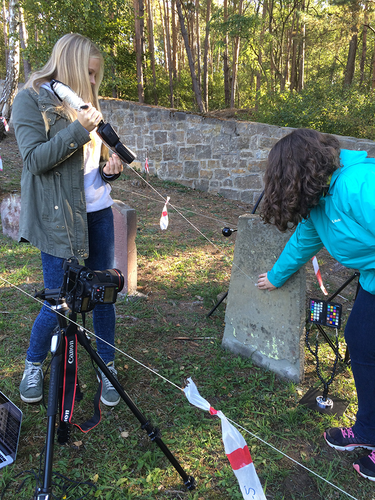 Badly weathered symbols and epitaphs on engraved gravestones in the town of Unsleben, Germany, hold some of the last remaining clues about the social structure of the former local community. Now with help from an international team of scientists, documentarians, and photographers, a German-Israeli student exchange program is working to uncover and preserve the stories of Jewish communities that lived in this Bavarian countryside town before the Second World War.

The cemetery documentation project is tapping into rich demographic information about the vocation, gender, kinship and the interconnectedness of inhabitants, to bring to light missing information about the social structure of the town of Unsleben and others across the region. There to aid this conservation effort in the fall of 2015, Chelsea Graham, Digital Imaging Specialist at Yale’s Institute for the Preservation of Cultural Heritage, helped lead students to enhance and decipher gravestone information using Reflectance Transformation Imaging. This computational technique captures many images of the gravestones from different angles. The images are processed into dynamic visualizations and 3D models that allow re-lighting, interaction and investigation of the surface of gravestones.

A major success of the exchange program, the students from Israel and Germany have established strong friendships through their work to solve new puzzles and ultimately rediscover their shared history. Graham was impressed by the students’ work to piece together details from the gravestones with historical records and first-hand accounts. “The students are searching together for the traces of the people buried here. Through their efforts we are seeing the character and dynamics of the community emerge again”, she said. As part of an English class at Rhön Gymasium in Bad Neustadt, yet more students engaged to translate project findings in local newspapers

In 2014 the cemetery documentation project was awarded the prestigious Simon Snopkowski Award and continues every second year with renewed focus on a different Jewish cemetery in Lower Franconia. The findings for the program from 2013 can be seen at an English-German webpage.